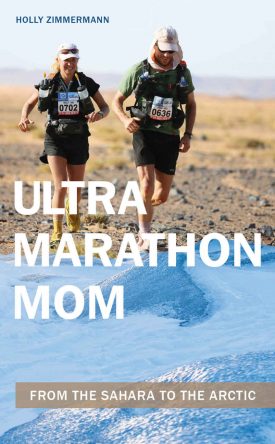 Ultra Marathon Mom: From the Sahara to the Arctic

Holly Zimmermann, mother of four, has endeavored to take on some of the world’s most difficult and dangerous foot races.

A grueling 160-mile ultramarathon through the Sahara Desert is the core of her story. Tales of running under a scorching sun, living on granola bars and nuts, and sleeping on the ground of an open tent are balanced with heartwarming stories of friendship and camaraderie. Interspersed between her Sahara adventures, Holly recalls previous races and training runs full of mishaps, written in her own humorous style.

After having conquered the Sahara Desert, she takes on the Polar Circle Marathon in Greenland. There she experienced temperatures cold enough to cause frostbite within minutes. With chains on her running shoes and four layers of clothing, Holly describes how she ran in one of the most harsh but beautiful places on earth, another life-altering experience.

Training and planning for ultramarathons as well as nutritional tips for fueling the body before and during the race are also described.

Ultramarathon Mom: From the Sahara to the Arctic tells a unique story and delivers a meaningful message: Live your dreams.

Holly Zimmermann is an American extreme sports athlete, taking part in events ranging from mountain and desert ultras, mud runs, and endurance bike races to running a marathon in the Arctic. She holds a master’s degree in Mechanical Engineering as well as an MBA and worked for many years in research & development for military applications before moving to Germany where she now lives with her husband and four children.

Holly is an enthusiastic vegan and encourages a healthy lifestyle through motivational speaking in companies and at sporting events.