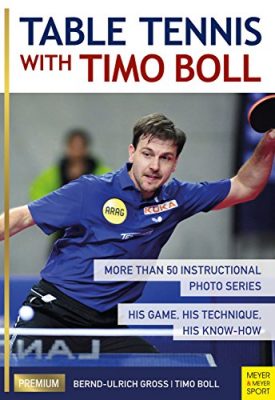 Table Tennis with Timo Boll: More Than 50 Instructional Photo Series. His Game, His Technique, His Know-How

In this book, Timo Boll and Bernd-Ulrich Gros provide the reader with as much information as possible about modern table tennis. Timo’s exceptional technique and successful game are analyzed in more than 50 instructional photo series with nearly 700 serial photos and more than 100 individual photos. The left-hander is considered the master of rotation. This book will tell you exactly why. Timo’s many checks and tips provide a wealth of information for one’s own practice. His thoughts on tactics and playing philosophy, as well as information on racket material and training, complete the book. It is a tutorial for all players and coaches who want to take their game to the next level. The extensive photo material will be a valuable resource for achieving ambitious goals in table tennis.

Born in 1981, Timo Boll is the most successful German table tennis player of all time. The left-hander was ranked number one on the world ranking list three times (in 2003 and 2011). Since 2002, he has been among the top 10 players in the world. No other player has won as many European championships-seven in Men’s Singles alone. After he led the world ranking for the first time in 2003 and then defeated the three best Chinese players one after the other to win the 2005 World Cup in Liege, Belgium, he was for many years considered THE most dangerous opponent for the Chinese aces. He is a world-class player who has also made a name for himself as one of the most fair players in the worl.

Bernd-Ulrich Gros , was the head coach of a German Bundesliga table tennis club from 1989-1991. He was publisher and editor of the German table tennis magazine TischtennislehreA” and organizer of big table tennis events. Gross is involved in the production of the monthly Newsletter of the Japanese company Butterfly.