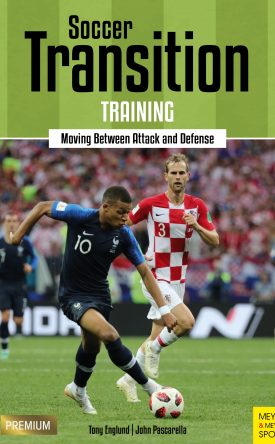 The 2018 soccer World Cup highlighted the increasing emphasis on transitional awareness and tactics. From elite domestic leagues worldwide to local youth coaching clinics, there is a pronounced effort to help coaches and players recognize and seize the advantages gleaned through controlling transitional moments. Pep Guardiola (Manchester City), Jurgen Klopp (Liverpool), and Mauricio Pochettino (Tottenham Hotspurs), among many others, have climbed to the forefront of the coaching ranks in recent years, espousing various pressing, counter-pressing, and counterattacking schemes that have made their teams so difficult to play against. Though coaches worldwide have focused on transitional moments as the next tactical revolution in soccer, there has been a remarkable lack of written coaching material on the subject. Transition in Soccer is the first complete study of critical transition moments in the beautiful game. This book offers everything coaches at any level need to help their teams dominate in transition, including: detailed, ground-breaking analysis of the phases of transition and terminology, including pressing, counter-pressing, and counterattacking; comprehensive examination of defending and attacking transition, emphasizing tactical considerations and opportunities; 100 distinctive exercises and dozens of additional progressions and variations to assure that coaches of every level have all the tools needed to train their teams to control transitional situations; and additional material which includes coaching instruction on how to condition teams for situations not always considered in transition discussions–from set-pieces to movement through time phases in the match. Written by two leading soccer educators with decades of experience coaching at the highest levels from youth to professional, Transition in Soccer is the book that soccer coaches have been waiting for, both as a discussion of the nature of transition in the ever-evolving game and as a teaching tool to help their teams dominate on both sides of the ball!