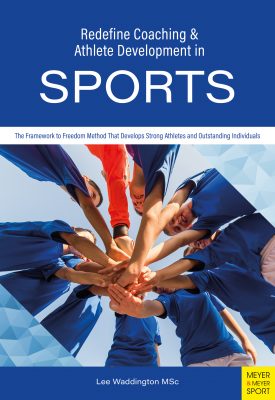 Redefine Coaching & Athlete Development in Sports is the first book to combine academic research, professional experience, and applied practice to redefine the way in which sports coaching is delivered and how athletes are developed. Written by Lee Waddington, a leader in the field of football coaching-learning content creation and delivery-and currently a practicing coach, this book clearly and concisely introduces the academic evidence for how the Framework to Freedom system can be applied to practice, both on and off the field.

The Framework to Freedom system focuses on the child as a whole rather than playing abilities only. It examines four key areas: coaching, care, connectivity, and consumption. Using sport as the cornerstone, the system develops each individual child through a unique coaching program that uses a game-based approach underpinned by the science of learning.

Outlined in the chapters are current issues within sports coaching-such as blocked practice, individual rather than team development, and the 10,000-hour myth-as well as creative solutions for these issues. These solutions are supported by academic research from several disciplines such as neuroscience, sports science, and psychology.

Through its clear structure, the book allows coaches and parents the opportunity to gain a genuine understanding of the science of learning that underpins the Framework to Freedom system and the unique way in which they can deliver practice to support each individual athlete. The book is an essential resource for any sports coach, parent, or student wishing to develop a new way of using evidence-based theory and methodology to create practices that develop strong athletes and outstanding individuals.

Lee Waddington is a UEFA “A” licensed and FA Advanced Youth Award qualified coach with a master’s degree in Applied Sport & Exercise Psychology.Lee has worked for several Premier League clubs, including Manchester United, Nottingham Forest, Blackburn Rovers, Manchester City, and Burnley, and has been involved in the UK professional academy system for nearly 30 years. He has a verifiable track record of exceptional player development, having assisted many players through his unique athlete development system, Framework to Freedom, to become professional soccer players in the UK and overseas, from the Premier League to the A League.