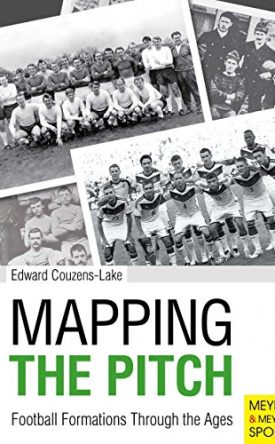 Mapping the Pitch: Football Formations Through the Ages

This book takes an informal and entertaining look at some of the most influential football coaches and teams in the game’s history as well as exploring some of the origins of football’s more well-known formations and the players who were an integral part of them.

By taking an informative yet informal and entertaining look at the history and evolution of football formations and tactics, the author identifies just a few of some of the pioneering figures in the early years of the game, people like Jack Hunter, the visionary coach of Blackburn Olympic who prepared his team for a crucial match by taking them to the seaside for a few days of “…hard running on the town’s famous sands as well as a regular diet of oysters, and, very strictly, no beer”. And the players of Queen’s Park FC who conceived and played tiki-taka football over a century before Pep Guardiola and his all-conquering Barcelona players were even born.

Mapping The Pitch looks at some of the great international sides in the game’s history, including the Hungary team which so astonished and captivated the sporting world in the 1950’s.It also explores the contemporary theme within the game that sees teams enter matches with a mentality of looking not to lose rather than to win, a telling but subtle difference between football today and how it was half a century and more ago, one typified by an emphasis on midfield domination and possession – one that is not so dissimilar to the priorities teams adopted in mob football in the middle ages.

Norfolk born Writer and Broadcaster Edward Couzens-Lake has (to Dec 31st 2015) written nine books to date, seven of which are exclusively his own work with two more books completed and published as ghostwritten autobiographies on behalf of the subjects, the most well known of which is Gossy-The Autobiography, the frank, amusing and often raw and very personal story of former Norwich City and Wales international footballer Jeremy Goss.

He is also, however, a creative and versatile freelance writer and blogger in his own right with a wide clients in his professional portfolio. Subjects that he has extensively written about include travel, architecture, music, antiques, history and psychology.

Edward currently lives near Chichester in West Sussex with his wife, a musician and his cat, alternating his personal and working time there with his second home in Norfolk.