Menu
Browse: Home » Products » Books » Relentless: The Story of American Soccer and the Coaches Who Helped Grow the Game 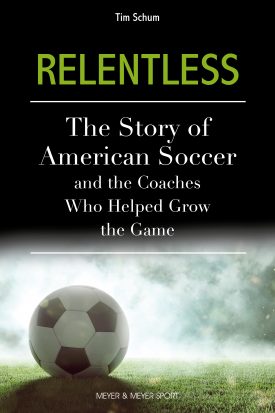 Relentless: The Story of American Soccer and the Coaches Who Helped Grow the Game

Soccer players may get all the glory, but behind every great player is a great coach. And behind every great coach today stands a deep fraternity who dedicated decades to supporting soccer’s long climb from obscurity to become one of the major sports in America. It was an uphill battle, fought persistently and creatively to overcome a public perception of soccer as “foreign,” “aloof,” “snobby,” or simply “odd.”

This is a story of individual and collective action, of coaches coming together to improve the sport and expand its reach. From coaching methodologies to standardizing rules, improving the play on the field and the perceptions beyond it, persistent coaches were instrumental in creating the game played and watched today.

Relentless tells the landmark and previously untold stories of resolute coaches, their love of the game, and how they transformed the sport in the United States.

Tim Schum is a retired professor of Physical Education. He coached the men’s soccer team at Binghamton (NY) University for 29 years. Upon retirement from coaching in 1992, the Colonial men had achieved a 259-125-43 record, including eight NCAA Tournament appearances and selection to eight ECAC Tournaments. The Colonials won two ECAC titles and were six-time State University of New York Athletic Conference champions.

Holder of a US Soccer “B” Coaching License, Tim was a senior staff member of the NSCAA Coaching Academy and served as an Olympic Development coach for the New York State West Youth Soccer Association. He served as president of the National Soccer Coaches of America (1982-83) and was presented the organization’s Honor Award in 1994 as well as inducted to its Soccer Hall of Fame in 2004.

Recipient of the Bill Jeffrey Award for his contributions to college soccer in 1994, Schum edited the NSCAA (now United Soccer Coaches) magazine Soccer Journal from 1980-2002 and has authored/edited five books related to soccer or sports including a 50-year history of the NSCAA published in 1992.

Tim lives in Endwell, New York, and he and wife Ann are proud of their 18 grandchildren and one great-grandchild.