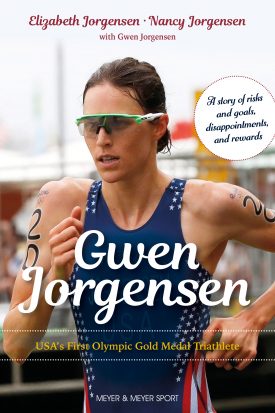 Gwen Jorgensen intends to win the Rio 2016 Olympic triathlon—an event no US athlete, man or woman, has ever won. Gwen is a stubborn perfectionist, driven to excel. Combining natural ability, organization, and discipline, she chases this goal with passion.

In Gwen Jorgensen: USA’s First Olympic Gold Medal Triathlete, readers take a front-row seat at the Rio 2016 Olympics and watch Gwen as she battles the ocean, careens down dangerous hills on her bike, and runs to victory. Interspersed throughout is her tale of transformation from child swimmer to university runner and eventually Olympic triathlete. It is a story of disappointment, failure, change, growth, and accomplishment.

This book explores themes of personal discovery, risk-taking, goal-setting, and team-building and is sure to inspire all young readers to reach for their own dreams.

Gwen Jorgensen is an accountant turned Olympic champion. After winning Gold in the 2016 Rio Olympics triathlon, Jorgensen announced her pursuit of a bold new goal: the marathon. Her announcement came just months after giving birth to her son Stanley. Gwen hopes her story inspires young athletes to chase their dreams and goals, but most important, to enjoy the process. Gwen can be followed on social media platforms, @GwenJorgensen.

Gwen’s sister Elizabeth Jorgensen is a Wisconsin high school English teacher published in Azalea (Harvard University), English Journal and Teachers & Writers magazine. Named Carroll University’s Graduate of the Last Decade, she has also co-edited Sijo: Korea’s Poetry Form and authored an education book as part of The Hack Learning Series (Times 10 Publications). When not teaching or writing, she can be found working out, watching Bravo with her dog, or playing violin.