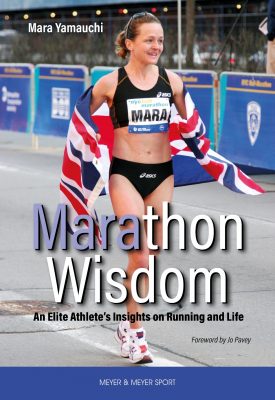 Marathon Wisdom: An Elite Athlete’s Insights on Running and Life

Mara Yamauchi is a two-time Olympian, Commonwealth Games bronze medalist, and the UK’s second-fastest female marathon runner ever with a personal best of 2:23:12. But there is much more to Mara than just running fast.

This book of 42.195 insights—the number of kilometers in a marathon—distills the wealth of wisdom and experience Mara has gained as a world-class athlete. From planning training, optimizing nutrition, and preparing effectively for racing to coping with disappointments and struggles with mental illness, Mara shares everything she has learned—good and bad—as one of the world’s top marathoners. Still, she does not spoon-feed her readers with training plans; instead, she encourages them to think critically to understand how to improve and set their own goals. This book also takes the reader into the revered world of distance running in Japan, one of the world’s marathon superpowers. It has something for everyone, from beginner runners to competitive athletes and those aspiring to the very top.

Mara’s insights are also applicable beyond running and are meant for anyone who wants to realize a dream or achieve a lifetime goal in whatever field is special to them.

Mara Yamauchi is a British former elite marathon runner and former diplomat. She is the UK’s second-fastest female marathon runner of all time, a two-time Olympian, Commonwealth Games bronze medalist, and London Marathon runner-up. Her sixth-place finish in the 2008 Beijing Olympics is the best performance ever by a British woman in the Olympic marathon. She grew up in Kenya and has lived and worked in Japan for nine years. She now lives in London and works as a writer, commentator, and coach.