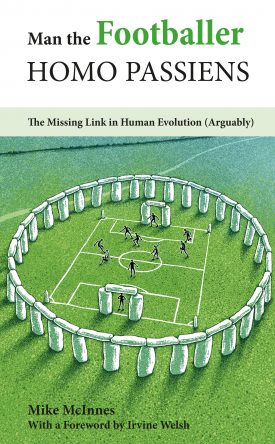 In this book you will discover the truth – that Homo passiens is the missing link in human evolution. That Homo sapiens is a recently arrived imposter in the evolution of the genus Homo – a charlatan, a fraud, a villain, a quack! That all the academic stuff about consciousness, language, science, and so on, emanating exclusively from (and created by) Homo sapiens is evolutionary hogwash! It all came not from Homo sapiens – as this recently arrived, pathological lying subspecies claims repeatedly in schools, textbooks, literature, and all institutions of higher learning – but from the founder species, Homo passiens – Man the Footballer! As evidenced in this book, humans evolved two legs for football, domed head and flat face for subtle power heading, and flat and levered feet with non-opposable big toes for shooting.

We all love to be clever, and this book is to be associated with its seminal ideas and not necessarily to be read from left to right. The thinking fans will want to be associated with the mad science presented here. Man the Footballer also contains a foreword by Irvine Welsh, author of the bestseller Trainspotting. After reading this book, football will never be the same again!

Mike McInnes is a retired pharmacist from Edinburgh, Scotland. He has a special interest in cerebral energy metabolism and its modern impairments. Mike has written The Hibernation Diet, The Honey Revolution, and The Honey Diet, all of which argue that human sleep is a high-energy enterprise with respect to the brain and its energy supply. His research into the evolution of the large and greedy human brain led to the conclusion that this is the direct result of our strange selection of upright bipedalism as a locomotive strategy, and consequently this research led to the book on Homo passiens.