Menu
Browse: Home » Products » Books » Major League Soccer 2019: Everything You Need to Know About the Teams 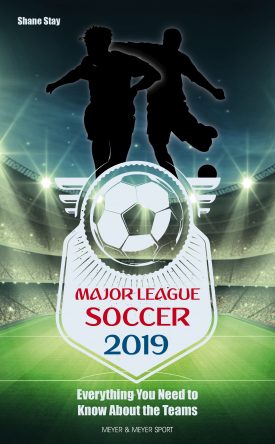 Major League Soccer 2019: Everything You Need to Know About the Teams

Paperback (select by clicking below)

Major League Soccer (MLS) is on the fast track to becoming the world’s next super league. Major League Soccer 2019: Everything You Need to Know About the Teams gives in-depth information on this amazing league, including the players, coaches, each team’s style of play, and even background on each MLS city. As American soccer continues to explode in popularity, it’s only a matter of time before the United States takes over the world’s most popular sport. Compared with the soccer-playing world, MLS had a late start, playing its first games in 1996, yet its goal is to surpass the EPL, Serie A, La Liga, and Bundesliga. This book explains the current focus of the MLS and its plans for the future. MLS is a league that has attracted the world’s best, such as David Beckham, Wayne Rooney, Zlatan Ibrahimovic, World Cup champions Thierry Henry and Kaka, along with a host of talent from the United States men’s national soccer team, including Landon Donovan and Clint Dempsey. All the players and current team rosters are discussed in this book. While players come and go, the fans are beginning to establish an unbreakable, lifelong bond with their teams-the Portland Timbers, Atlanta United, D.C. United, Columbus Crew, Sporting Kansas City, LA Galaxy, Seattle Sounders, and every other MLS city in-between, along with expansion teams, such as Cincinnati and Miami-and this book will spur their enthusiasm. Major League Soccer 2019 takes the fan through every aspect of this exciting-and fastest growing-league.

Shane Stay (January 15, 1976) is a former professional soccer player, writer, comedian, producer and founder of Leaf Dressing. In the calendar year of 2008, Stay bottled Leaf Dressing, co-authored a print book, published a magazine story, worked clubs as a comedian, played restaurateur, received a Master of Arts and played professional soccer. In 1999, Stay founded the first online Current Events game, CE Game. He is the author of The World Cup 2018 Book: Everything You Need to Know About the Soccer World Cup, and Why American Soccer Isn’t There Yet. Stay has a Bachelor of Arts from Sonoma State University and a Master of Arts from Southern Illinois University. He was born in Carbondale, Illinois.