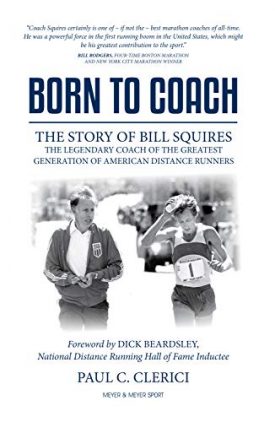 Born to Coach : The Story of Bill Squires, the Legendary Coach of the Greatest Generation of American Distance Runners

Hardback and Ebook (select below)

From tasting his own blood while running hard as a Notre Dame miler to producing the top US marathon legends in the epicentre of the running boom of the 1970s and into the 80s, Bill Squires not only survived being born with a misdiagnosed and potentially fatal defective heart, but the late-developing skinny kid also amassed numerous track records as a collegiate All-American while struggling academically. As the first coach of the ground-breaking Greater Boston Track Club, Bill Squires was the key figure in the creation of the greatest generation of American distance runners. Coaching for years at all levels, it is with this vast accumulation of first-hand knowledge and experience that legendary Olympians and major marathon champions such as Bill Rodgers, Alberto Salazar, Greg Meyer, Dick Beardsley, wheelchair champ Bob Hall, and more, individually and with GBTC dominated the landscape and set the pace for future generations via Bill’s innovative race simulators and group-training techniques that are still used today. Proof of his determination and perseverance appeared early as he survived the physical and emotional childhood trauma and effects of a misdiagnosis that stunted his emotional and physical growth. He continually pushed himself through personal pain in competition and maturation; found his eventual athletic calling as a record-setting runner; and became the highly sought-after benevolent ambassador of running as a coach. He is proof that one should never give up.

Paul C. Clerici, author of Images of Modern America: The Boston Marathon, A History of the Falmouth Road Race: Running Cape Cod, Boston Marathon History by the Mile (and the Chinese-language version Journey of the Boston Marathon), and History of the Greater Boston Track Club, has covered running and the Boston Marathon since 1988. A journalist, photographer, and former newspaper editor and sports editor, he has been recognized by the Marquis Who’s Who publication with the Albert Nelson Marquis Lifetime Achievement Award. A lecturer and historian often invited as a guest on television and radio programs, the New England Press Association and Massachusetts Press Association award-winner and Camy 5K Run & David 5K Walk race director competes in nearly every distance from the mile to the marathon, including two triathlons, 43 marathons (the Boston Marathon 23 times), and has won numerous age-group and Clydesdale awards. A graduate of Curry College in Milton, MA, the Walpole High School Hall of Fame member resides in Massachusetts.