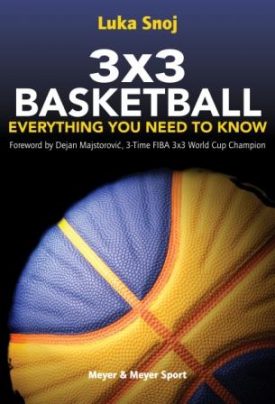 3×3 Basketball: Everything You Need to Know

Since its formation in 2010, 3×3 basketball’s popularity has rocketed. In only seven years, 3×3 basketball has gone from being played casually as a pick-up game to becoming an official Olympic sport, with the 2021 Summer Games showcasing its debut.

3×3 Basketball is the first-ever book to cover multiple aspects of this up-and-coming sport. In this book, author Luka Snoj comprehensively presents the differences between traditional basketball and 3×3 basketball and outlines the fundamental tactics and game structure, theory, terminology, as well as principles for successful play.

The author also details the history of 3×3 basketball–why and how it was formed as well as how the sport has evolved over the years. He also describes the competition system, including how the rules have changed, and what teams have been successful over the past decade. In this section, Snoj weaves contemporary interviews with top players like Dusan Bulut–3×3 basketball’s GOAT (four-time world champion)–to round out the narrative on a sport whose popularity will only continue to grow.

Finally, Snoj provides both statistical and analytical analyses of the sport.

With all its insights, tips, and knowledge, this book is a must-have for 3×3 basketball players, coaches, and fans all over the world!

He was an avid chess player when he was younger and wrote a book on the similarities between Blitz chess and 3×3 basketball. He uses his background in analytics in this book.

Snoj manages and coaches his own 3×3 basketball club in his hometown of Ljublijana, Slovenia.